Introducing Updated Tax Rules from Government, the ATO & Cases and Much More 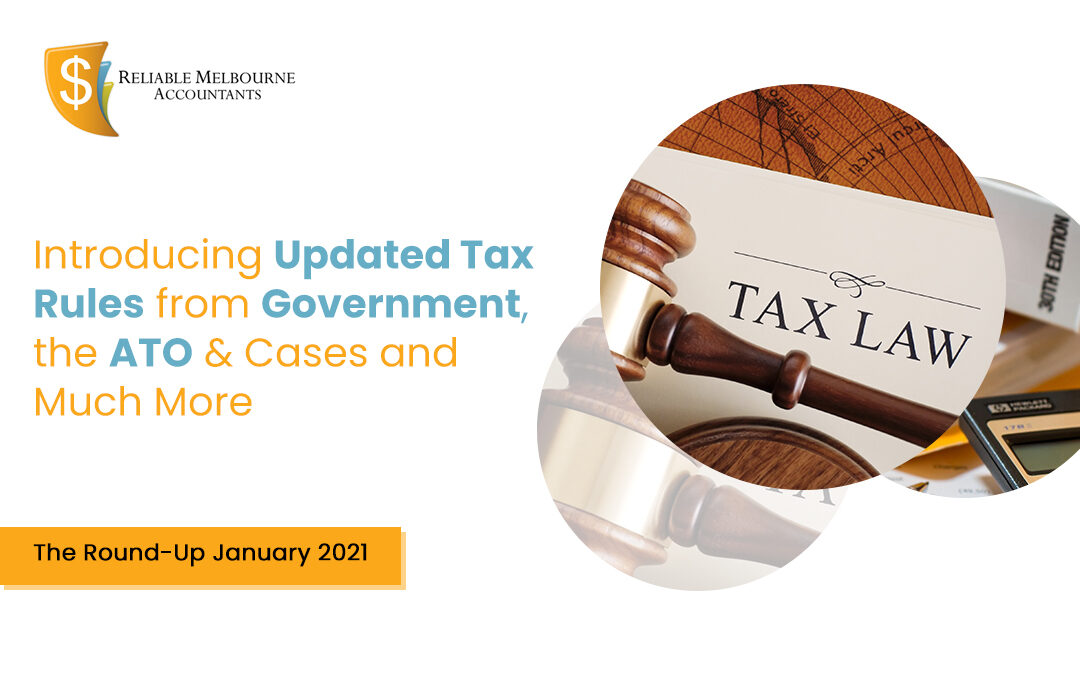 Back in the last year, some laws were approved that gave certain grant payments for COVID-19 that would be made non-assessable non-exempt income. The cashier or treasurer is required for legislation to announce that a grant program would be eligible by legislative instruments only if he is satisfied and agrees that it was responding to the economic effects of the COVID-19 pandemic. And, it was declared on or after September 13, 2020.

Keep one thing in mind that grants that are paid to the governments will not be automatically considered as non-assessable non-exempt income. The grants must meet the standards, and the cashier or treasurer needs to confirm that they can qualify for tax-free treatment once the relevant state government has been made an application.

As per the view of ATO, state or territory governments who made financial assistance payments will be taxable for business entities unless they qualify for tax-free treatment by following the rules.

The Inspector-General of Taxation (IGOT) has released a report in response to complaints registered by businesses considered ineligible by JobKeeper by the ATO has recommended that in some rare cases, business entities will be allowable to show that they made a supply in a tax before the end of the period March 12, 2020, even if they have not made any sales via their business.

Some conditions must be met for the entity to access the JobKeeper for eligible business participants. One condition is that the entity must have had their business income in 2018-2019 income year and notified the ATO on 12 March 2020 or done some supplies connected with Australia in a tax period that might be started on or after July 1, 2018, and finished before March 12, 2020, and notified the ATO on March 12, 2020.

The report of IGOT points out where an entity makes a financial interest, then this constitutes that a financial supply is made. The simple meaning of this, the action is taken during the starting of the business before trading activities started, this could allow an entity to fulfill the additional conditions.

The ATO has indicated that it will not be actively finding potentially eligible entities. If advisers possess any clients who can qualify as a result of the IGOT report, then it would be mandatory to contact the ATO to verify how they may get a review of any prior decision.

As per the announcement of last year’s federal budget regarding potentially eliminating FBT on fringe benefits related to re-training employees, the treasury has published a consultation paper that focuses on potential changes to the deductibility of self-education costs.

At present, self-education expenses are deductible where education courses allow the taxpayer to enhance their skills or are more likely to grow the income derived from current income-earning activities.

But self-education expenses are not deductible if the course is undertaken by the taxpayer to get new employment.

Despite this, the consultation paper also discusses, is it important to introduce a new deduction that would enable deductions beyond these limits, to allow for a deduction for education and training for future employment.

There has not been any response to a proposal by the government after the submission of the consultation paper in January. 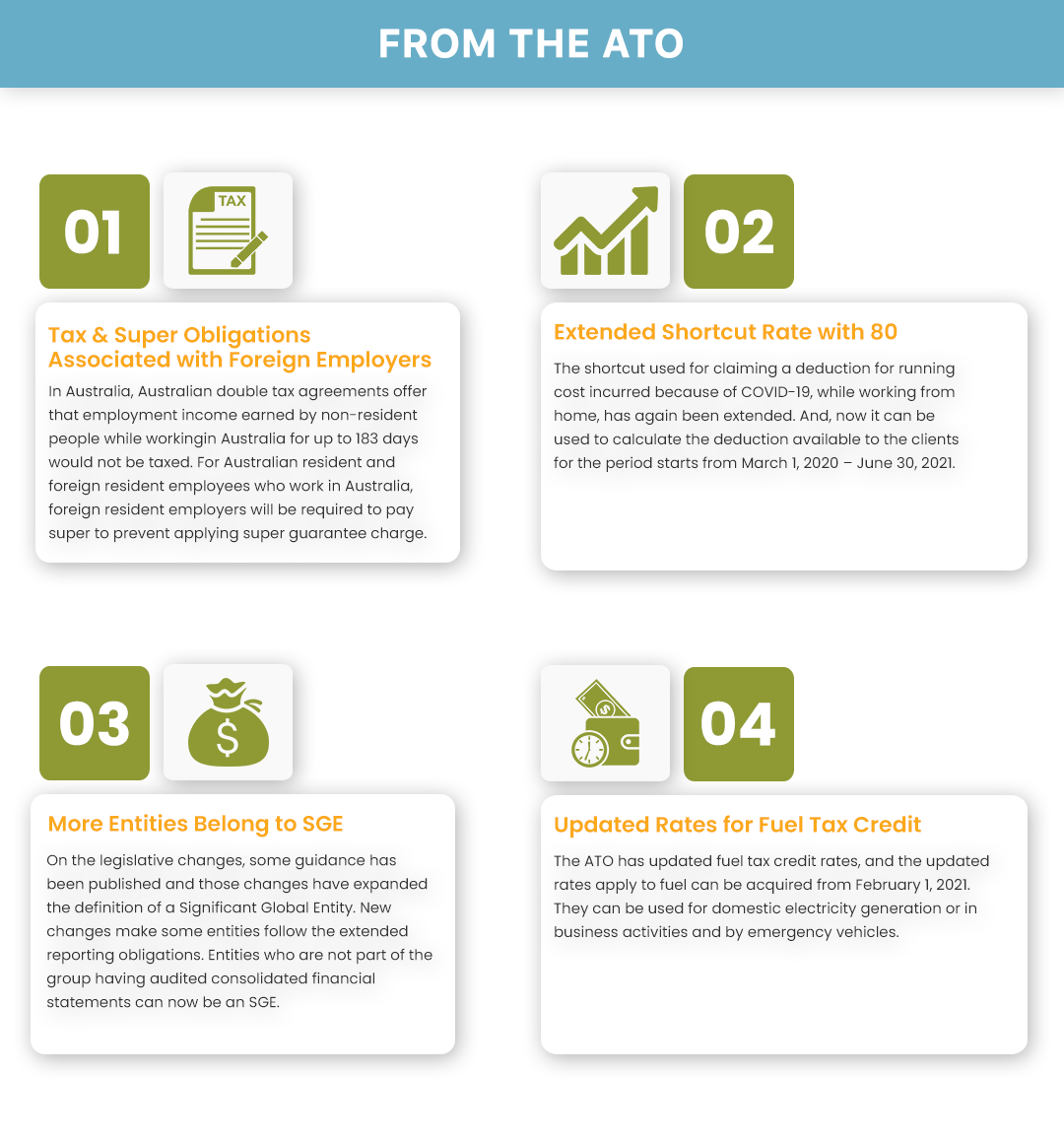 This product ruling provides information regarding the ATO’s position in relation to tax consequences for small business entity clients that step into the rural products prepayment program with elders. The main consideration is whether the functions of prepayment rules are to prevent an immediate deduction for the expenses and whether the arrangement could fall within the scope of general anti-avoidance rules in part IVA.

For this product, the product ruling confirms the following for taxpayers:

Trading Stock for Private Use Update

Updated estimate amounts can be utilized to determine the value of goods that are taken from trading stock for private use for 2020-2021 have been published by the ATO, and it can be shown below:

Sole Trader Eligible for JobKeeper Along with backdated ABN

By the ATO, a taxpayer who was considered ineligible for JobKeeper based on that he didn’t fulfill the requirements of having an active ABN on March 12, 2020. But, he later applied to have his previous ABN reactivated, with the effective date on July 1, 2019.

However, the taxpayer argued because ABN was reactivated on July 1, 2019, so it should be considered active at that time, even the decision to reactivate the ABN was encounter later.The AAT held that if the ABN has an effective date that pre-dates March 12, 2020, and then ABN condition must be satisfied, as a result, the taxpayer was eligible for JobKeeper.

The ATO has declared that it is appealing the decision, and they requested an accelerating hearing to the Full Federal Court.

Some Amendments to the Immediate Expensing Measures

This legislation continually making changes to the functions of the new expenses for depreciating assets provisions that were declared in the 2020-2021 federal budget.

To access the provision, entities need to have aggregated turnover of less than $5 billion, this is the first modification in rules. Basically, it excludes the foreign parent entity’s turnover. But, the company should have incurred expenditure real depreciating assets in the 2016-2017, 2017-2018, and 2018-2019 income years of at least $100 million.

Another change is that entities can opt-out of temporary full expensing and backing business investment incentives on an asset-by-asset basis. However, it looks like the choice is only for those who are not small business entities. At the higher level, it seems like SBEs that are opting for applying simplified depreciation rules in the accurate income year may not have the ability to choose not to apply the asset write-off rules to assets that will qualify for an immediate deduction.

The legislation that was prior before parliament seeks to represent restrictions on entities accepting or making cash payments of $10,000 or more, the currency bill 2019 was revealed from the Senate notice paper, which means it has failure/lapsed and must need to re-introduce to parliament before it could become law.

The bill proposed the establishment of a cash payment limit and represented offenses for entities that accepted or made cash payments of $10,000 or more from January 1, 2020. This legislation has been withdrawn because it is necessary to deal with the impact of COVID-19 and worries raised in a review of the bill as to whether it could prove to be the best way to handle the black economy.

In this blog, you have learned various rules announced by the government and the ATO. Despite this, you get to know about a case study. Well, if you are a resident of Australia or a non-resident of Australia, then you will know what could be taxed or what couldn’t. Once you’ve read this blog, you’ll know what the ATO has announced new rules for tax as well.

If you want any adviser or an accountant for your business that can help you maintaining tax payments and other financial statements, then you can reach Reliable Melbourne Accountant that is an accounting firm in Melbourne, Australia.