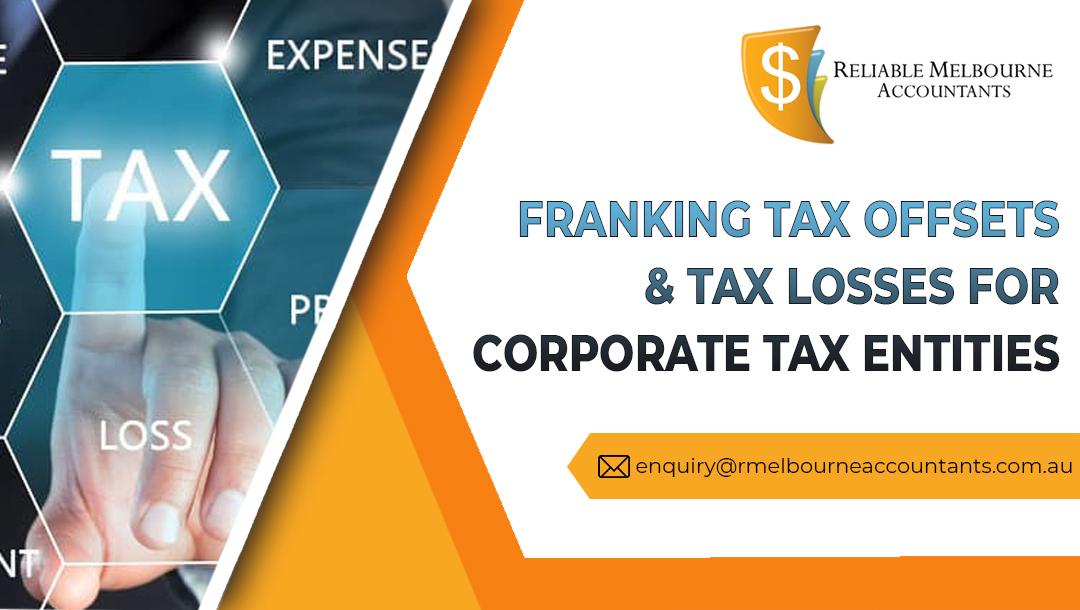 In this blog, you’ll get detailed information about franked tax offset and effects on losses for corporates tax entities.

What is a Franked Tax Offset?

If you are credited or paid franked dividends or non-share dividends, your assessable income will include the dividend’s amount you were paid and the franking credit amount attached to the dividends. When you lodge your tax return, then you must have to include both amounts.

It can be utilized to minimize the tax liability from all sources or forms of income, as well as your taxable net capital gain.

Before diving into detail, let’s have an idea of franked dividends so you don’t get confused:

What Are Franked Dividends?

You buy a small piece of ownership of the company when you invest in shares. Being a shareholder, you receive a small part of the company’s profit that is paid to you, which is known as dividends.

When an entity of corporate gets franked dividends, the receipt is unbiased from a tax angle. Because it is authorized to a franking tax offset for franking credit that is attached to the dividends.

The company can choose the amount of previous year losses they want to deduct, after first having offset losses against the net exempt income. The following are some restrictions on the previous year tax losses amount that an individual chooses to deduct:

These are anti-avoidance rules that prevent the company from using previous year losses and then making current year losses by turning excess franking tax offset into an equivalent tax loss.

A present year loss appears when both:

The entity of corporate will have an excess franking offsets amount to the range/extent that its franking tax offset is exceeded its income tax responsibility. In this scenario, the corporate entity will turn the excess amount to identical to the amount of tax loss by dividing it by the CTR, i.e. corporate tax rate.

In the end, the converted tax loss will be grouped with any present year tax loss following the general provisions. This amount will be subtracted from the grouped loss amount, only if the corporate entity has any NEI. The resulted aggregate amount will become the tax loss for the income year that will the result of the current tax year loss.

Step 1: work out the present year tax loss by following the general provisions.

Converting the excess franking offsets into a tax loss by using the below approach:

The total of this calculation will be the result of the entity’s total franking offsets.

Step 2: Minimize the amount of income tax through all the tax offsets with the exception of the below tax offsets:

But, don’t minimize the income tax by the given above tax offsets, but by all other offsets.

If any, then add the loss amount under the general provision plus the amount of the tax loss from the converted excess franking offsets.

Step 4: minimize the loss amount determined at step 3 by the entity’s NEI (if any). If the outcome is a:

The corporate tax entity can’t choose in how much previous year tax losses it can deduct where the sum of the deduction exceeds the entity’s total measurable income.

Limits to Previous Year Tax Losses an Entity can Opt for

Limit 2 needs to be considered by the entity when checking out what the previous year losses amount can be used against income tax payable. To constraint the losses deducted, limit 2 will apply so that excess franking offsets are not produced to neglect refreshing previous year tax losses to present year losses.

After reading this blog, you’ll know about franking tax offsets and corresponding effects on losses for the entities of the corporate. You’ll get to know about the limits where a corporate entity would not be able to deduct previous year tax losses. Despite this, you’ll know method statements to determine tax loss.

Apart from the above information, if you want to seek help from an accounting firm, then you can contact Reliable Melbourne Accountants to get quality and reliable services.