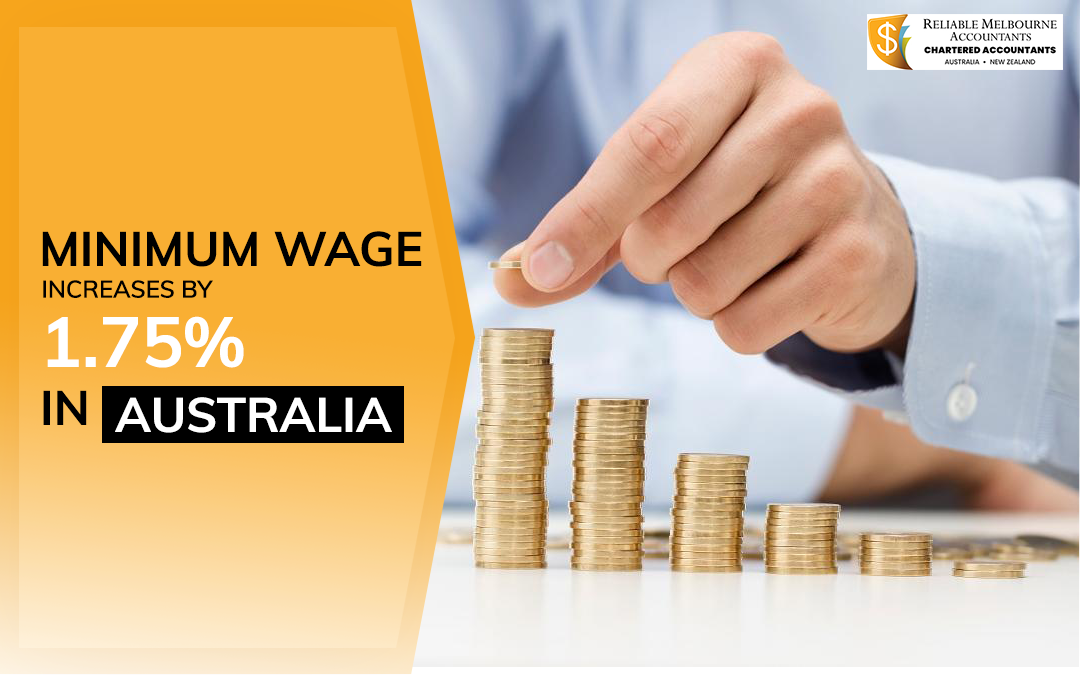 Minimum Wage Increases by 1.75% in Australia

The Minimum Wage in Australia is the crucial element to maintain effective cost structure while you run a business. Fair Work Commission has set certain standards that clarify minimum grades of pay for distinct roles for all industries. As decided by the Fair Work Commission, the minimum wages of Australia changes on July 1, 2020.

What are the Defined Minimum Wages in Australia?

The National Minimum wages that are currently paid to employees is $19.49 each hour, or $740.80 each 38-hour week.
The different job types get different minimum wages.

Who Decides About Minimum Wages?

The business wages that are received by employees are determined by the panel in the Fair Work Commission. The minimum wages are examined on an annual basis to assure that the Australian employees get fair income. If any of the determined salaries are altered in National Minimum Wage Order, they will apply from the first full pay period after July 1, 2020. However, before implementation, the commission should publish the altered wage rates before July 1, 2020, every year in Modern Award.

This is done to ensure that the employees and employers have sufficient notice to make adjustments in business operations. Therefore, under Modern Awards, you will be required to stay at the top of any changes on an annual basis.

There are numerous factors that determine minimum wages, some of these are:
• Rates according to piece (This means that the worker receive the pay rate for the amount picked, pruned, packed or created)
• Casual loadings
• Wage rates for employees with certain disabilities, juniors, employees to whom training arrangements are applicable.

Is the Employer Mandated to Pay Minimum Wage?

The answer is yes. As its name suggests, the minimum wage is the amount that the employee must get. This could be drawn as an agreement or award set by the commission. The entrepreneur can decide to pay more if they want.

What is the Result if an Employee Gets Paid Above Average Wage?

Being an employer, you can also opt to pay your employee above the minimum wages mentioned by the commission. You will have to stay updated with an increase in wage rates and assure that you pay more than new rates. So, if your business does not keep pace with pay increase, you can risk underpaying your staff.

What Wages Do the Employees Deserve Who is not Eligible Under Modern Award?

If the employee does not get covered by agreement or award that state or national minimum wage applies, the minimum wage is not the thing that fits all. The employer is required to be efficient enough regarding the age of staff; you are required to be aware of the increments that can influence the salary to the staff.

Do the Minimum Wages Of Different States Different?

Will the Minimum Wage Alter For Employees Due to Distinct Age Groups?

It depends upon the agreement or award in which the business fall. Agreements and awards can impose some percentage of adult wages for an identity who is a junior worker.

If the business is set to be free of Award under Western Australian State legislation and Fair Work system, the junior rates shall be applicable under the age of 20. The rates are tended to enhance and the rate of 17 years old will differ from 18 years old. When the worker reaches the age of 21, the full adult minimum wage must hold applicable.

Are Minimum Wages Based on the Industries?

Yes, it can. The rate of wages could differ on the basis of:
• The agreement or award that applies
• Work hours it means overtime, penalty rates, and allowance.
• Duties of employees that is manager or supervisor level
• Categories of employment or type that means full-time or casual employees.

The increment in wages was based on the restrictions to contain Coronavirus and the data about the sectors experiences the biggest decline in pay. The economy is in recession and the businesses are struggling to survive and the unemployment rate is enhancing. The decision by the government related to wages will influence hiring and firing decisions by employers.